The paradox of the photogram 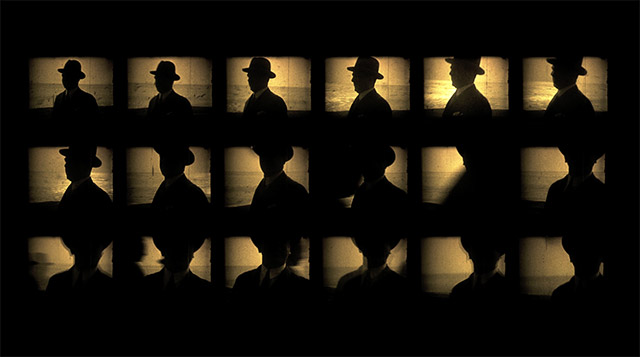 Like most adults, Emmanuelle Michaux was a child whose efforts and whose good behaviour were rewarded by pictures. These were of the moving variety, those of films by the favourite directors of her movie-loving father: Cocteau, Tati, Fellini and Truffaut. They were soon joined by shots taken by a first Super 8 camera she was given at the age of 11.

From these youthful years, Emmanuelle Michaux has maintained a perpetually fresh taste for representing not only people and things, but also fleeting moments that stir emotions or remind us of them at a distance — in the same way that scents, flavours and the magical effect of the names of certain countries have such an effect on us. And one can easily imagine that the shadow of the Narrator is never far off, that the model for this role could easily merge into the person of the artist’s grandfather, an amateur film-maker and the first creator of these images that rub shoulders with other film fragments picked up in flea markets. As contemporaries of Marcel Proust, the Lumière brothers — who had worked so hard to capture movement and release it once it had been seized — were themselves keen amateurs, skilled in portraying small family joys on the pretence of demonstrating cinematographic techniques. Working backwards, in Three seconds and two images, a contemporary artist now separates the photograms that unfold in sets of fifty, into ten lines of five dots, according to the order the movement of which she deprives them. 50 images, meaning three seconds captured at the cadence of 16 images per second, plus two more. In all that makes three seconds and one eighth, for these small 8x6cm photographs that all look exactly alike unless one takes a closer look, since they give rhythm to a performance (The Dance, 2014), a line of party-goers (The Conga, 2014), the intensity of an embrace (The Kiss, 2014) — and even the infini- tesimal variations in the path of the sun (The Sun, 2014).

The latter is also the topic of And the light was that replaces the 50 images with a single piece of the same size, adorned with gold leaf, inlaid in the same black sandblasted and matt panels, the same cold lava shared by reminiscences and obsessions. Two sequences in the same format and material to conjure up that which once was, fragments of true intimacy borrowed without consent, reproduced in the universal assumption of art work. Whether memories of a “Sunday filmmaker” grandfather or boxes of films by an amateur who will remain forever anonymous, these images in perforated strips — whose mission was to counter the passing of time by reproducing it – thus achieve, if not eternity, at least an enduring existence displayed for other anonymous individuals, be they visitors or collectors. Drawn from sequences taken from the 1930s to the 1980s, recovered thanks to probably hasty family successions, the 30 or or so short videos grouped in the generic series ”Amateurs” includes the Latin word for love feature a play on the double pattern of diversion and return through a set of deliberately aggressive effects, similar to those of time and wear on over-frequently screened copies. The length varies from 20 to 90 seconds, corresponding to the duration provided by the length of the Lumière film spools available at the time. The video production of Emmanuelle Michaux is nonetheless far removed from a pastiche style, instead achieving a new aesthetic, an amusing incursion or an erotic suggestion backed by such diverse means as the sound environment, image processing or the choice of sequence. Through its extreme slow-motion interpretation, The Man wearing a hat (2012, 92”) portrays the movement of an elegant figure, filmed by the seaside, visibly satisfied and resembling the protagonist of The Man who smiles — one of the unstructured shots from the series Three seconds, two images. We know nothing more, but one can guess at a context of tangible and perfectly assumed happiness, just as one can imagine outside the off-camera background of a seaside resort — maybe even that of Cabourg-Balbec — in the early 20th century, when the pleasure of being seen, the savour of encounters among socialites vied with the benefits of health cures and dips in the sea. Alongside the interplay of transitions between genres and image transformations, Emmanuelle Michaux also adds ten variations of The Man wearing a hat, which returns in 2015 in the form of slides with a diffuse backlighting, the deceptive light of against-the-light shots of a sun invented on a sheet of Canson drawing paper. Yet these are authentic portraits of an ordinary fellow immersed in the mystery of a fiction hovering between a dim polar light and a Far Eastern twilight. Frozen in the midst of a stroll that made him into an unusual and jovial character, the man with the hat becomes the protagonist of a novel adapted for the screen involving a complex installation — borrowing “transparency and reveal” special effects from the cinema of the 1930s to 50s. This is no coincidental link, since the sculptural work that Emmanuelle Michaux has been doing since the early 2010s returns to the very roots of the longstanding ties between photography and film, between photograms and stage-setting, between artifice and artefact. Stripping down a random shot; infusing it with new meaning by aligning on canvas its images taken according to a particular cadence; stretching out the rhythm so as to model an atmosphere; reversing the luminous flow of the screening to dramatize the now fixed image: Emmanuelle Michaux appears to be far from having exhausted this incessant and fruitful exchange between generations of images. Four series do not define a life work; but in this instance they produce a consistent and legible ensemble liable to overcome the barrier that all too often confines contemporary art to the circle of art dealers, critics and collectors. Literary in terms of the background of memories, precious by their formal richness, entertaining by the stories the artist invents, these reprised images — following following on from each other in successive metamorphosed versions — go well beyond the meaning one expects from a reasoned work, instead producing a show inherited from the magic lantern of moving picture exhibitors, and from the ever entrancing mystery of filmed things.