«Right from the outset, intimacy seemed a subject in inself » 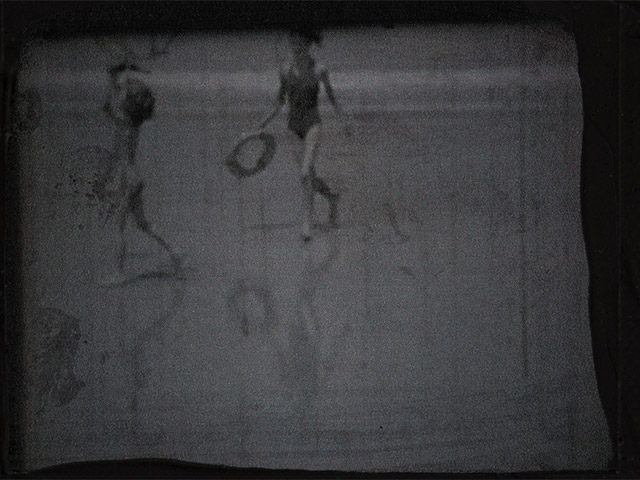 How did you choose the title of your exhibition at artgeneve?
I had long since been fascinated by the words “sculpting in time” drawn from a book by Andrei Tarkovski. In reflecting on my relationship with animated, cut-up, frozen images, it appeared an obvious choice. I also thought of a subtitle that is subtly different: “For fear of the night closing in”.

The fact that “the night” has not closed in is thanks to your father, who passed on his collection of films: family archives, second-hand vintage negatives…. Roland Barthes refers to the detail that shoots out from a scene like an arrow and pierces the observer as the punctum. What ‘pierces’ you in a short sequence and makes you want to cut it out?
First of all, I know these films very film for having worked with them for my full-length feature film The stranger (2010). They have pervaded my consciousness. In addition, there is always an element of chance in any choice. Nonetheless, the decisive argument is always that of motion. The Conga, for example, is a moment of absolute happiness that is very fleeting. Its contagious joy is an encouragement to single it out. There is also another sequence that is not part of the selection: a woman wearing a small hat who is a guest at a party and suddenly emerges from the shadows. The moment when her face is touched by the light touches me instantly.

Do you know the characters in these films?
Some of them. For example, one of my grandfather’s friends called Julien is fooling around in one of the sequences. He was someone I appreciated that I got to know as an elderly man but who still had the same smile.

Basically, all these people were just living their lives without thinking that “magical seconds” of their existence were engraved in any way, nor that a gallery would exhibit them a century later…
As far as I’m concerned, I’m only aware of experiencing those moments when I take photographs of them. I need to go via the lens in order to see reality in a different way. That’s possibly why I handle lenses so often…

What do you feel about the fact that the characters are deceased?
It is indeed quite dizzying. There is a sense of vanity in the artistic sense of the term. I think that this relationship with death via images is bound up with my own history.

In what way ?
This takes us into the realm of psychoanalysis! My father lost his mother when he was very young, just twelve years old. He was the one who found her dead in the flat. Throughout my childhood, this subject was basically taboo. When his mother died, my father dropped out of school and seeking refuge in cinemas. His passion for films dates from that period and also remains associated with this bereavement. In the course of my childhood, I understood that my father also took refuge behind his film camera. And one day, when we were looking at some of these images, he said “You see that woman, that could be your grandmother.”

People with an obsession for film – or photography – seem to store up “life reserves” for later…
Yes. In my father’s experience there is clearly a quest for life through images – especially since he has no films of his mother. Filming someone shows a wish to keep their image alive forever. My first Super 8 film told the story of a dead woman coming back to look for someone on earth…

Why did you not become a purely fiction-based film-maker? How did your experimental technique arise?
At is happens I am also a script-writer, but I have never imagined “creating” a fictional script myself. As soon as it comes to an image, I find myself adopting an abstract approach: I have even been so far as to scrape a film.

Coming back to Barthes and his definition of a photography, as a certificate of presence. Photography shows something that undeniably has existed. When looking at your deteriorated black and white images, are you aware that the characters they depict have been alive?
One must distinguish colour from black and white, which tends to make things more unreal. Curiously, the use of black and white instils a certain doubt, a distance. Reality appears to be closer in the first Super 8 films of the 1960s and 70s. This nearness makes them seem more “real” to me.

Did you ask yourself what there was between the 16 or 24 images that a camera captures every second?
On the film, the space between images is black. In my works, I’ve chosen to stick to this black and to reproduce it.

And what is black?
Pierre Soulages proved that it’s light… But for me, in this instance, it’s the loss of images between images. It’s life that has existed but will no longer exist. Since I do not feel entitled to reinvent it, black prevents me from entering the realm of fiction.

When looking at 50 almost identical images, does one observe each picture separately, or does the eye reconstitute the overall sense of movement?
There is an awareness of general movement; but the spectator will also seek movement in each fixed image, whatever its place or format…

What is the significance of the 4/3 format of the photograms you cut out?
Contrary to 16/9, 4/3 is a window. There is no sense of horizon. It is therefore more intimate, more secret.

Do you remember the first moment when you had a camera or a film camera in your hands?
I remember the day I received my first film camera. I was happy. The first thing I filmed was my house, its furniture, the people around me, and myself in a mirror. Looking back on that, what struck me was that I was filming daily reality and not a special occasion such as a birthday or a Christmas meal. Right from the start, intimacy seemed to me to be a subject in itself.

Do you still film people in your immediate circle?
I prefer taking photographs of them. Because I’m afraid that the film might vanish once I’m no longer around to take care of it…

Does one need to care for films?
Yes, because of the volatility of the media involved. A film is not lasting, whereas a photograph, once placed in an album, seems to be there fore ever and does not require any medium.

Therefore, by cutting up films, you transform them into photographs…
That’s right; I keep them safe, I take care of them.

That’s very kind of you! Do you have a sense of giving a touch of eternity to the characters you reveal?
Yes, especially since they’re strangers. The paradox of cinema is to create stars who seem timeless, despite being doomed to oblivion like everyone else. With Three seconds, two images, I give a space of representation to people who had never even thought of that: I ensure that they are not forgotten by restoring some light to them.

Isn’t there a somewhat ghostly element in this series?
I won’t deny it. An act of memory involves a somewhat macabre side; but in this series, I give priority to the life light radiating from happy moments, festivities, smiles… If there are any ghosts, I hope they are friendly ghosts.

On a personal level, how do you manage to make the most of happy moments, to savour this “life light”?
It’s a daily learning process, but the birth of my child made be more than ever away that all the tiny little moments lived with him were precious because they are unique. I long preferred the night, but have recently been learning to love the day.

Photography is the art of light – and therefore of day…
Of course, and the awakening of a child, the development of his gaze, his first words, have the power – just like photography – to make time stand still.

That reminds me of another your works And the light was, the golden square surrounded by a black area… Here too, the miracle of light, lost in the mass of eternity, seems to make time stand still.
For me, this work is a battle: I did not want observers to know whether the black matter would cover gold, or if the gold would expand to absorb black. That is in fact how I envisage life. A burst of light amid chaos. The infinitely small human consciousness isolated amid a boundless universe…

On the scale of the universe, I think that the gold square would be smaller!
Definitely, but in my view the black extends further the canvas. Beyond the frame, which is merely an artificial limit, the blackness stretches to infinity. Hence the importance of looking for gold zones, wherever they are, and of celebrating them, whenever one can.